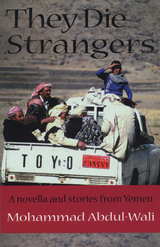 They Die Strangers
by Mohammad Abdul-Wali
translated by Abubaker Bagader and Deborah Akers
University of Texas Press, 2002
Paper: 978-0-292-70508-1
They Die Strangers, a novella and thirteen short stories, is the first full-length work of the distinguished Yemeni writer Mohammad Abdul-Wali to appear in English. Abdul-Wali died tragically in an aviation accident, and his stories were collected after his death by the translators Abubaker Bagader and Deborah Akers. Abdul-Wali was born in Ethiopia of Arab Yemeni parents. His stories, filled with nostalgia and the bitterness of exile, deal with the common experiences of Yemenis like himself who are caught between cultures by the displacements of civil war or labor migration. His characters include women left behind, children raised without fathers, and men returning home after years of absence. He explores the human condition through the eyes of the oppressed and disenfranchised and is particularly sympathetic to the plight of women. Abdul-Wali writes in a realistic style, sparse and simple, a style that the translators have reproduced well in this volume.
AUTHOR BIOGRAPHY
Abubaker Bagader is Professor of Sociology at King Abdul Aziz University in Jiddah, Saudi Arabia. Deborah Akers is associated with the Anthropology Department at Ohio State University.
TABLE OF CONTENTS