See other books on: Fiction | Literary Collections | Middle Eastern | Trees
See other titles from University of Texas Press
Nearby on shelf for Oriental philology and literature / Arabic / Arabic literature:
9780816648832
9781477302521 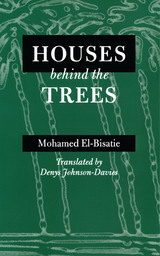 Houses behind the Trees
by Mohamed El-Bisatie
translated by Denys Johnson-Davies
University of Texas Press, 1998
Paper: 978-0-292-72095-4
Set in a small village in the Egyptian Delta, El-Bisatie's finely tuned novella illustrates the social and sexual tensions in a community in which nothing is secret and where people's pasts haunt their present. When Mussad catches the butcher's son Amer with his wife, the whole village knows and waits with bated breath for Mussad to exact his revenge. But something goes wrong. Mussad's ill-planned schemes are choked by an opaque veil of history--his wife's sexual past, the war-torn lives of their families, and the personal allegiances of his friends and enemies. The village women relive private desires and inner fears as the men take sides in the struggle, either to protect Amer from Mussad's wrath or to help Mussad track down and confront his nemesis. In the words of Denys Johnson-Davies, "El-Bisatie is a writer's writer, which is to say a writer who makes no concession to the lazy reader. El-Bisatie stands back from his canvas and sketches his characters and events with a studied detachment. While there is drama in his stories it is never highlighted. The menace lurks almost unseen between the lines."

Library of Congress subject headings for this publication: