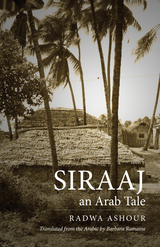 Siraaj: An Arab Tale
by Radwa Ashour
translated by Barbara Romaine
University of Texas Press, 2007
Paper: 978-0-292-71752-7
Set in the late nineteenth century on a mythical island off the coast of Yemen, Radwa Ashour’s Siraaj: An Arab Tale tells the poignant story of a mother and son as they are drawn inextricably into a revolt against their island’s despotic sultan. Amina, a baker in the sultan’s palace, anxiously awaits her son’s return from a long voyage at sea, fearful that the sea has claimed Saïd just as it did his father and grandfather. Saïd, left behind in Alexandria by his ship as the British navy begins an attack on the city, slowly begins to make his way home, witnessing British colonial oppression along the way. Saïd’s return brings Amina only a short-lived peace. The lessons he learned from the Egyptians’ struggle against the British have radicalized him. When Saïd learns the island’s slave population is planning a revolt against the sultan’s tyrannical rule, both he and Amina are soon drawn in. Beautifully rendered from Arabic into English by Barbara Romaine, Radwa Ashour’s novella speaks of the unity that develops among varied peoples as they struggle against a common oppressor and illuminates the rich cultures of both the Arab and African inhabitants of the island. Sub-Saharan African culture is a subject addressed by few Arabic novelists, and Radwa Ashour’s novella does much to fill that void.
AUTHOR BIOGRAPHY
RADWA ASHOUR, a native of Cairo, is Professor of English at Ain Shams University. She has written several well-known novels and short stories, as well as critical works on Arabic literature.BARBARA ROMAINE has taught Arabic for fifteen years and is the
TABLE OF CONTENTS