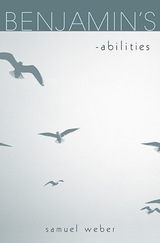 In this book, Weber, a leading theorist on literature and media, reveals a new and productive aspect of Benjamin's thought by focusing the critical suffix "-ability" that Benjamin so tellingly deploys in his work. The result is an illuminating perspective on Benjamin's thought by way of his language - and one of the most penetrating and comprehensive accounts of Benjamin's work ever written.
TABLE OF CONTENTS