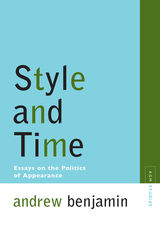 Interruption is often read as the foundational gesture of modernity--the means through which modernity asserts its existence by claiming its discontinuity with the past. Exposing the limitations of such an understanding, this book offers a very different approach: here, modernity is the site that poses the question of how we are to continue when every attempt to think and understand the present is marked by the necessity of an interruption. Through a reading of Walter Benjamin's writings--particularly on interruption, fashion, and Jugendstil (or Art Nouveau)--Andrew Benjamin in this work offers a sustained meditation on the role of interruption in modernity. His book departs from and elaborates an important but overlooked dimension of Benjamin's discourse: the question of style as it bears upon temporality and spatiality. Extending this meditation in exciting and unexpected ways--toward problems of cosmopolitanism, immigration, and the graphically pornographic, for instance--the author is able to translate Benjamin's multifaceted formulations on style, the dialectical image, awakening, temporality, and spatiality into lucid and highly intelligent stylistics underscoring the philosophical notions of Schein and Erscheining, the interruptions of modernity, and the politics of sameness and otherness.

Nothing less than a rethinking of the conditions of Western art as it relates to politics, architecture, and time, this study of Walter Benjamin's modernity in temporal and spatial terms is a provocative and original work of philosophy in its own right--a work that suggests that the time has come to revise existing paradigms.
AUTHOR BIOGRAPHY
Andrew Benjamin is professor of critical theory in design and architecture at the University of Technology Sydney. He has also taught philosophy and architectural theory in both the United States and Europe, where he teaches regularly at the Architectural Association in London. His recent publications include Architectural Philosophy (Continuum, 2001), Philosophy's Literature (Clinamen, 2001), and Disclosing Spaces: On Painting (Clinamen, 2004). He is joint general editor of the Walter Benjamin Studies series published by Continuum.
TABLE OF CONTENTS