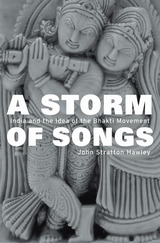 India celebrates itself as a nation of unity in diversity, but where does that sense of unity come from? One important source is a widely-accepted narrative called the “bhakti movement.” Bhakti is the religion of the heart, of song, of common participation, of inner peace, of anguished protest. The idea known as the bhakti movement asserts that between 600 and 1600 CE, poet-saints sang bhakti from India’s southernmost tip to its northern Himalayan heights, laying the religious bedrock upon which the modern state of India would be built.

Challenging this canonical narrative, John Stratton Hawley clarifies the historical and political contingencies that gave birth to the concept of the bhakti movement. Starting with the Mughals and their Kachvaha allies, North Indian groups looked to the Hindu South as a resource that would give religious and linguistic depth to their own collective history. Only in the early twentieth century did the idea of a bhakti “movement” crystallize—in the intellectual circle surrounding Rabindranath Tagore in Bengal. Interactions between Hindus and Muslims, between the sexes, between proud regional cultures, and between upper castes and Dalits are crucially embedded in the narrative, making it a powerful political resource.

A Storm of Songs ponders the destiny of the idea of the bhakti movement in a globalizing India. If bhakti is the beating heart of India, this is the story of how it was implanted there—and whether it can survive.

REVIEWS
In this comprehensive book, Hawley traces the 20th-century history of the notion of the bhakti movement—the idea that there was a significant, unified, pan-Indic turn to devotional religiosity in medieval India. The author argues that the invention and promotion of this idea was a key aspect of nation building in that it offered a narrative of Hindu unity despite the vast and disparate set of religious processes ranging over different vernacular languages, regions, and time periods. Hawley also shows how Muslim contributions to affective, devotional bhakti religiosity were often marginalized in this narrative. He covers in detail the primary intellectual forces behind the idea of the bhakti movement (for example V. Raghavan), arguing that it was a conception constructed largely by Indian intellectuals (although European scholars had a hand in shaping the idea). He also considers at length pre-modern conceptions of how bhakti as a historical phenomenon was viewed… This book is a model of meticulous intellectual history of modern India.
-- M. Heim Choice


Hawley is a master of North Indian devotional literature. He understands the inner logic and expressive aims of this powerful religious movement, and he makes lucid, convincing judgments on major historical questions in this innovative study.
-- David Shulman, The Hebrew University of Jerusalem


There is no other scholar who could have pulled off the wonderfully exciting achievement of this book. It is erudite, wide-ranging, meticulous, accessible, articulate, and elegant. Hawley’s scholarship is in many ways revolutionary and of huge significance to our understanding of devotional religion in India.
-- Rupert Snell, The University of Texas at Austin


It should be essential reading for all students of Indian religious history and will provide a model for future histories of different elements of the Indian bhakti traditions.
-- John E. Cort Religious Studies Review

TABLE OF CONTENTS
Contents
Acknowledgments
Transliteration and Pronunciation
Introduction
1. The Bhakti Movement and Its Discontents
2. The Transit of Bhakti
3. The Four Sampradbys and the Commonwealth of Love
4. The View from Brindavan
5. Victory in the Cities of Victory
6. A Nation of Bhaktas
7. What Should the Bhakti Movement Be?
Notes
Bibliography
Index