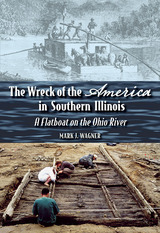 Flatboats were the most prolific type of vessel on the Ohio and Mississippi Rivers during the early 1800s. Thousands of these boats descended the two rivers each year, carrying not only valuable cargo to New Orleans but also western-bound emigrants to newly opened territories. By the late 1800s, flatboats had completely disappeared, and no intact examples were known to exist. Our knowledge of these historic vessels had been limited to illustrations, memoirs, and traveler accounts.

That changed in 2000 after local residents found a wreck on the Ohio River shoreline in Illinois. Archaeologist Mark J. Wagner and his colleagues from Southern Illinois University Carbondale investigated extensively and established that the wreck was a pre–Civil War flatboat, which they named America, after a nearby town.

In The Wreck of the America in Southern Illinois: A Flatboat on the Ohio River, Wagner provides a brief description and general history of flatboats and the various reasons they wrecked—such as poor workmanship and encounters with pirates, storms, rocks, and floating trees. Wagner describes the remains of the America, how it was constructed, the artifacts found nearby and inside—including pewter spoons, utensils with bone handles, metal buttons, and an iron felling axe—and the probable cause of its sinking. Wagner concludes with a history of the America since its discovery in 2000 and a plea that the boat be removed from the riverbank and preserved before the Ohio washes it away.

Mark J. Wagner is the director of the Center for Archaeological Investigations, Southern Illinois University Carbondale. He is a former president of the Illinois Archaeological Survey and the author of The Rhoads Site: A Historic Kickapoo Village on the Illinois Prairie, as well as numerous essays, technical reports, and books.

TABLE OF CONTENTS
Cover
Title Page
Copyright
Contents
Acknowledgments
1. Introduction
2. Arks, Broadhorns, and Other Flat-Bottomed Boats
3. Dashed to Pieces: Flatboat Wrecks on the Ohio and Mississippi Rivers
4. Stuck in the Mud: Documenting the America
5. Spoons, Pots, Caulking Irons, and Wood Samples: The America Artifact
6. How They Did It: Building the America
7. The Wreck of the America
8. What Happened Afterward
Glossary of Boat-Related Terms
Notes
Bibliography
Author Biography
Back Cover