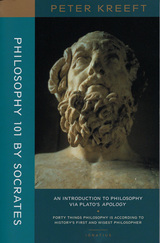 Philosophy means “the love of wisdom.” Kreeft uses the dialogues of Socrates to help the reader grow in that love. He says that no master of the art of philosophizing has ever been more simple, clear, and accessible to beginners as has Socrates. He focuses on Plato’s dialogues, the Apology of Socrates, as a lively example to imitate, and a model partner for the reader for dialogue. Kreeft calls it “the Magna Carta of philosophy,” a timeless classic that is “a portable classroom.”

“If only every introductory course were as engaging as Philosophy 101 by Peter Kreeft! Kreeft offers a marvelous way of using Plato’s Apology both to introduce the whole scope of philosopher and to evoke a personal response. Even the diffident freshman, prone to keeping a new subject like philosopher as arm’s length, will feel the enchantment of love-for-wisdom that philosophy is supposed to be.” – Joseph W. Koterski, S.J., chair, Department of Philosophy, Fordham University

“A terrific introduction to philosophy through this not uncontroversial commentary on Plato’s Apology. Not everyone will agree that Socrates provided the best possible defense for himself nor that he intended to. But Kreeft’s is an eminently defensible reading of the Apology and will awaken many a student to the delights of Plato and Philosophy. The comparisons of Socrates with Christ are fascinating. This book will go a long way to consoling those who are not privileged to have Socrates or Kreeft as teachers in the flesh.” – Janet Smith, Sacred Heart Major Seminary, Detroit

AUTHOR BIOGRAPHY
Peter Kreeft teaches philosophy at Boston College and is the author of scores of books in philosophy and religion, among them, from St. Augustine's Press: An Ocean Full of Angels, Socratic Logic, The Philosophy of Jesus, Jesus-Shock, The Sea Within, I Surf Therefore I Am, If Einstein Had Been a Surfer, and Summa Philosophica.